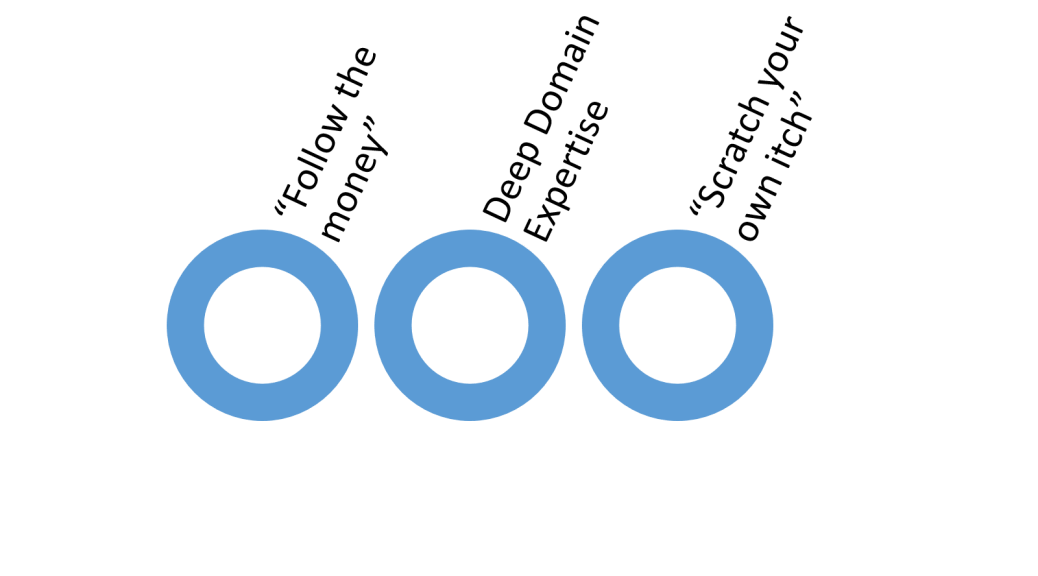 Most entrepreneurs are told to “scratch their own itch”, or solve a problem that they have themselves. It is good advice, but only one of many methods to find problems.

Most B2B companies tend not to either use their product or have the problems for the type and kind of users they are trying to solve problems for.

There are 3 ways I have seen people find problems to solve.

1. Follow the money: The founders of Ariba, where I worked, were not OSM (Operations Spend Management) experts by any means. They did not “have the problem” of non-production, non-manufacturing spend. The way the 2 founders came up with the problem was to look at spending patterns of large companies using classical analysis of expense statements. They spent time looking at where companies were spending money, where they are making money and finally figured out that non-plan, non production spend on “pens and paper clips” was a fairly large part of most businesses.

2. Domain expertise: In starting Infosys, the founders were not having the problems of Y2K, but they knew enough customers, who had the problem. The main reason was that they spent enough time building, supporting and managing COBOL based systems for large companies. They did not have the problem of managing the systems themselves, but their customers did.

3. Scratch your own itch: If you have neither deep domain expertise or ability to analyze the market in a financial manner, you can solve problems you have. What I have seen from my own experience is that while, we hear about the successes (Facebook, Microsoft, etc.), most of the not-so-successful founder-led-problems are no so frequently mentioned. Many suffer from “Clustering Illusion” bias, or the tendency to erroneously consider the inevitable “streaks” or “clusters” arising in small samples from random distributions to be statistically significant.